Air of discontent around Cerrejón mine deepens as Colombians cry foul Work at the Cerrejón coal mine complex last October. The mining company denies claims that the local community has been adversely affected by pollution from the site. Photograph: Mariana Greif Etchebehere/Bloomberg/Getty Images

At the end of the day it always comes back to the dust, explains Luz Ángela Uriana Epiayú, describing life in the vicinity of one of the world’s largest opencast coal mines.

After nights of broken sleep above the hum of machinery from the Cerrejón mine– just over four kilometres from her indigenous community in the northern Colombian department of La Guajira – she awakes to air heavy with pollution, she says. Uriana believes this is causing serious respiratory problems for at least one of her six children. 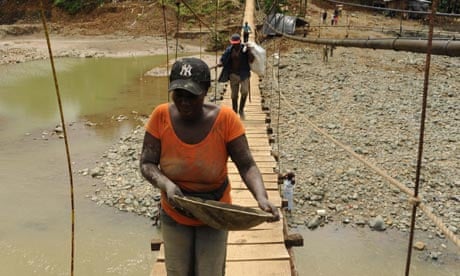 Eight months ago, a legal ruling obliged authorities to implement an environmental action plan and attend to the health needs of her son, three-year-old Moses, though Uriana’s lawyer says nothing has been done yet. The proposed expansion of the mine prompted Uriana to travel to London, to join campaigners lobbying the parent companies of Cerrejón, one of the largest sources of imported coal burnt in UK power stations.

“I would have loved to have come here in different circumstances, perhaps as a tourist, because I see how beautiful this country is and how well the people live here,” she says. “I think, though, that most people here in Britain probably have no idea where their coal is coming from and what price comes with it.”

Sebastian Muñoz, senior programmes officer for Latin America at War on Want, believes the owners of Cerrejón must acknowledge the wider impact of the mine’s operations. “The treatment endured by [these] communities is a scandal,” he says. “It’s time the mine owners respected the rights of communities, and were held to account for their actions.”

With that end in mind, communities from different countries who claim they are suffering as a result of Cerrejón’s operations converged on last Thursday’s annual general meeting of BHP Billiton, an investor in Cerrejón.

But as their protest began, the news Uriana had feared filtered through from Colombia: the work had already started, with a river tributary regarded by her community as a principal source of water diverted to accommodate the mine’s expansion.

The work is being undertaken to extract minerals from the bed of the Arroyo stream, a tributary of the Ranchería River, which has run dry after three years of intense drought, decades of overuse and a lifetime of public corruption in the province of La Guajira, one of Colombia’s poorest regions.

Cerrejón rejects allegations that its mining work has polluted the river. The company says problems with the river drying up are not linked to the mine’s use of 2,700 cubic metres of water a day – which, it says, is drawn from the river’s surface flow and groundwater in wells – but instead result from authorities failing to construct promised pipelines to provide water for local communities.

«My dream is that Cerrejón one day leaves, or shuts the closest pits so that we can again live in peace and tranquility». Luz Ángela Uriana Epiayú

Cerrejón did not respond to queries sent by the Guardian about Uriana’s claims but has insisted that it is committed to exemplary ethical behaviour. The company denies that it is generating toxic waste or substances harmful to the local community, and insists it has taken steps to ensure compliance with Colombian law on air quality.

Uriana says her greatest hope is that Cerrejón one day leaves, “or at least closes down the closest coal pits so that we can again live in peace and tranquility – and so that the community can come together again”.

In Brazil, meanwhile, BHP Billiton is facing criminal charges over the Samarco dam collapse a year ago, which left 19 people dead and hundreds homeless.

Brazilian prosecutors have charged 26 people, 21 for qualified homicide, for their alleged roles in the disaster, which sent a tidal wave of mining waste through the Minas Gerais region in November 2015.

Prosecutors claimed that employees of BHP and Vale, joint owners of the Samarco mine, knew the dam could fail but put profit before the safety of local people.